Barbara holds an undergraduate degree from Keene State College and a Master’s in Counseling from Antioch University. She studied writing at the University of Vermont, taking additional coursework at St. Michael’s College, and Johnson and Lyndon State Colleges. She worked thirty years in public education, five as a classroom teacher, and twenty-five as a middle, or high school counselor. She retired from the Essex High School Counseling Department in 2003.

Barbara honed her skills writing thousands of college reference letters, guidance newsletters and directives. Her short stories and articles have been published in Mainstream Magazine, Keene State Today, The Barton Chronicle and the St. Albans Messenger. During the two years she worked for the University of Vermont Extension Service, she wrote a weekly column for The News and Citizen and a monthly newsletter for 4-H families. She even tried her hand at writing blogs for the Flynn Theatre.

During the summers, Barbara lives a quiet life on a small Northern Vermont lake. She recently took up fishing to pass the time during this Covid-isolation-summer, and as an excuse to get out on the water. When winter approaches she flies away to her Florida property with the rest of the snowbirds. There, she starts her day walking the undeveloped trails in her neighborhood, then moves on to creative pursuits.

In addition to writing, Barbara is passionate about genealogy and restoring vintage photographs. She played guitar in a Ceilidh group and clarinet in the Newport Community Band. She sang with Northsong, a Classical Chorus, for sixteen years until the Covid pandemic shuttered the doors on group activities. She started a knitting group at the Goodrich Library that lasted over ten years, again, furloughed by Covid-19.

Barbara has three grown children, and six delightful grandchildren who are not furloughed by the pandemic. People say of her, she makes a friend everywhere she goes. 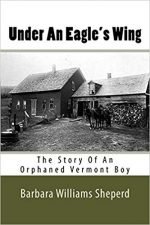 Under an Eagle’s Wing – Story of an Orphaned Vermont Boy
ISBN 9781530006625 | UNDER AN EAGLE’S WING is a historical novel for young readers. It is based on the life of Edward Williams, a boy who was left at the orphanage in Montpelier and later taken by a farmer and his wife to Camp Brook in Bethel. Set in Bethel, Vermont during the 1920s, Under An Eagle’s Wing is a humorous and poignant story of a young boy who is left at a Montpelier orphanage, and later taken by a farmer and his wife to their home on Camp Brook and raised with other orphaned boys. Killing Mrs. Rogers’ prize rooster with a sling-shot is the first of many adventures and pranks. But, it is a barn fire that breaks out after Arthur is smoking in the hayloft that shows him the true meaning of family. In Under An Eagle’s Wing we see what happens when Arthur is teased his first day at a one-room schoolhouse, meet his little sister Mabel, and have an adventure riding a traverse. We are with him as Christmas brings both heartbreak and unexpected kindness. We are in the sugar woods when Arthur drives the horses to collect sap and learns how to make maple syrup. We see him through his first crush, experience a small town Fourth of July celebration and an attempt at riding a bull. And, we weep with him as without a word he endures Mrs. Rogers’ cruelty. How close did Mazie come to being baked in the oven with the potatoes? What advice did Dr. Allen give Arthur when he ran away from home? What did Arthur learn from his summer living in the woods with his father when he was sent away? How did Arthur save Mrs. Rogers from the barn fire that broke out after he was smoking in the hayloft? And, who is the Eagle? Under An Eagle’s Wing tugs at the heartstrings as it casts a spotlight on a child who is trying to find his way in a world where he is special to no one. Based the life of Edward Williams, stories he told and his audio-taped memoirs, it gives readers an enjoyable and informative look at what life was like when their great-grandparents were young. It is fully researched and historically accurate, right down to the name of the train and the time it stopped in Bethel. 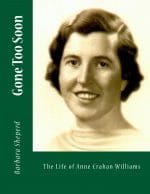 Gone Too Soon, a Biography of Anne Crahan Williams
ISBN 9781984060587 | Born on a Pittsford, Vermont farm in 1909, this daughter of a widowed first-generation Irishwoman with no money, managed to get herself through college at a time when only wealthy women were college educated. As the only college educated person in her community, she used her talents for the betterment of all. She was a champion of endless good causes, particularly if it meant lifting the sails of a child in need. She never traveled farther from home than New York City, but her knowledge was as broad as the world. She loved to read, loved research, and looked up every fact she didn’t know. She was a woman of faith who carried her heavy cross with courage and without complaint. This first book chronicles her life from her birth to the birth of her last child in 1943. Inside are eighty-three pages of scrapbook and hand-written journals which she kept during her years at Keene Normal School. 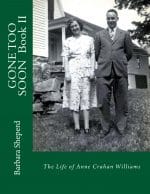 Gone Too Soon – Book II – The Life of Anne Crahan Williams
ISBN 9781719588607 | A continuation that chronicles her life in Amsden, includes a journal from the year she taught at Amsden School and many pages about her 4-H Club, THE HAPPY COOKERS. Also, the last letters she wrote to her daughter, Barbara, as she lay dying of Diabetes at Lenox Hill Hospital in New York City and finally at Rutland Vermont Hospital. The author remarked, “The Crahan family were very closed-mouthed about personal matters and offered little information about themselves. When I asked, I often heard, “Now, why would you be wantin’ to know that? That would be the end of the discussion. They strongly believed that children were to be seen and not heard. Indeed, until all the Crahans were dead, and I started doing genealogy, I didn’t even know that my Grandmother had a sister in Ireland. Mother was a little more generous with her information, but her need for privacy and my busy teenage years left us with little time to get acquainted at an adult level. I was a sophomore in college, nineteen, when Mother died. She took her stories with her. This book is the culmination of three years of intense research and writing. Fortunately, she left two journals, and I had the good sense to keep the last letters she wrote. Upon the advice of a friend, I have included everything I have. Here before you, is the life of Anne Crahan Williams. Anne… a brilliant scholar, a visionary, a teacher, an historian, a community leader, a good friend and neighbor, a 4-H leader, a mother, a faithful wife, a poet, a woman of courage and deep faith who was devoted to her family and lived to serve.” BWS