Susan Clark is a writer and facilitator focusing on community sustainability and citizen participation. She is an award-winning radio commentator and former talk show co-host. Her democratic activism has earned her broad recognition, including the 2010 Vermont Secretary of State’s Enduring Democracy Award. Clark is the coauthor of Slow Democracy: Rediscovering Community, Bringing Decision Making Back Home (Chelsea Green, 2012), and All Those In Favor: Rediscovering the Secrets of Town Meeting and Community (RavenMark, 2005). Her work strengthening communities has included directing a community activists’ network and facilitating town visioning forums. She served as communication and education director of the Vermont Natural Resources Council and Coordinator of the University of Vermont’s Environmental Programs In Communities (EPIC) project. Clark lives in Middlesex, Vermont, where she chairs a committee that encourages citizen involvement, and serves as town-meeting moderator. 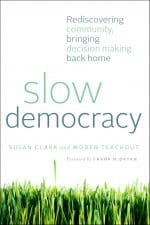