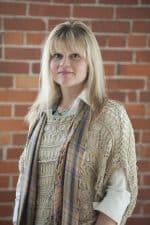 J. P. Choquette, writes Vermont thrillers with supernatural elements. She also coaches writers. When she is not working, you’ll find her sipping a hot beverage, reading, or in the woods…sometimes all at the same time.

The Pact
The Pact/Synopsis: For the Langlois family—Rick, Marion, and their 10-year-old son, Jude—the remote camping trip offered a way to reconnect. But when Marion goes missing Rick and Jude rush to find her…and discover something more sinister than they could have imagined. Vernon Heath is a dyed-in-the-wool Vermonter, poacher, and man on a mission. What he hunts now isn’t for the dinner table though. These creatures are deadly. Vernon and a handful of others enter the woods to end a centuries-old curse and protect future generations. But will they succeed?

Under the Mountain
Under the Mountain/Synopsis: It’s Gracelyn Edwards’ last summer at home. Being legally blind doesn’t keep her from running a popular “monster blog” or being an avid adventurer. Determined to capture footage of an elusive monster living deep in the Vermont wilderness, Gracelyn and her father embark on a once-in-a-lifetime adventure. Years later, her family in tatters, Gracelyn visits the woods again. This time for revenge. Can the monster—and the secrets Gracelyn has uncovered—be destroyed before it’s too late?

Shadow in the Woods
Shadow in the Woods/Synopsis: Six go into the woods. Three come out. Addie Preston, a new mental health counselor, is flattered when her colleague asks her to co-lead an intensive Ecotherapy weekend for a small group of clients. The group of six head into the remote trails of the Green Mountains. As a storm engulfs the area, the group takes refuge in a cave off of the trail. No one is prepared for what they will discover. Or what will discover them. ​

Silence in the Woods
Silence in the Woods/Synopsis: Set in 1917, this is the prequel to Shadow in the Woods. Four friends and photojournalists set out in the woods looking for answers. Why have so many hikers and hunters gone missing in the area of Shiny Creek Trail? No one imagines the evil lurking in a remote cave. A horrifying discovery leaves one person dead and two others missing. Two months later, Paul, one of the four, returns to the forest to find his wife. But will he find her before someone—or something—finds him?

Let the Dead Rest
Let the Dead Rest/Synopsis: After losing both her parents and her long-time boyfriend, doll sculptor Isabel Joven is emotionally raw. When a mysterious gift—a vintage doll—arrives, Isabel can’t imagine the dark shadow it will cast on her life… In 1944, Etta Hayes is over-the-moon excited to welcome home her WWII fiancé. But the doll he brings home leaves Etta feeling edgy and frightened. Will she unravel the doll’s dark secrets too late? Set in two parallel timelines, Let the Dead Rest is a gripping, twisty-turning supernatural suspense novel.

Epidemic
Epidemic/Synopsis: Everett James, a reporter in New England, finds himself in the middle of the most important investigation of his life. When a deadly virus, H1N2, breaks out in the small town of St. Albans, Vermont, James takes the story. But his research turns up more questions than answers. What’s the link between the state’s largest pharmaceutical company, BeckePharm, and Palmer Laboratories, a New York-based upstart drug company? How did the virus, a mutated strain of the Avian Flu, end up in such a rural area? As the death toll rises, James must find the answers before running out of time.
Contact listing owner